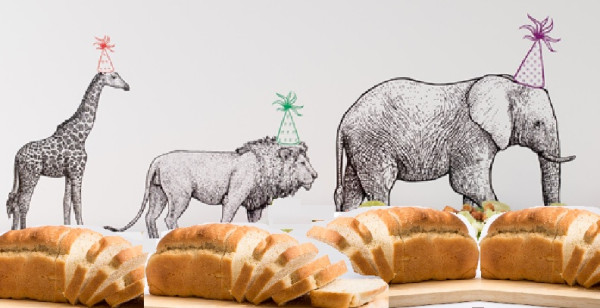 “Truly, truly, I say to you, you are seeking me, not because you saw signs,

but because you ate your fill of the loaves.

"Bread and Circuses" is a phrase often said to have originated with the Roman poet, Juvenal, during the hay day of ancient Rome.  It has become a cliché  in the world of politics for promising material prosperity and entertainment sufficient for the masses to continue to follow whatever political figures are making these kinds of promises.  George Orwell, in his dystopian novel, 1984, describes an ultimate form of this, as the "proles" (short for "proletariat," or common people) are kept occupied with plentiful alcohol and pornography while being fed a diet of "gruel."  This satisfied their baser desires, keeping them from caring much about more important matters like good nutrition, education, justice, equality, opportunity, and not least, freedom.  When a culture is said to be subsumed by "bread and circuses" the population is so self-absorbed the only thing they want or desire is the immediate satisfaction of their most basic needs.  In the Gospel of Luke, the rich man who says he can "eat, drink, and be merry" is called a fool by God because he has made the material existence more important than his spiritual life.

So this statement of Jesus is a sobering indictment of the people who are following him.  He has miraculously fed 5000 men (and additional women and children) on a Galilean hillside and demonstrated supernatural power in healings and casting out demons.  The crowds want more.  But Jesus recognized this is exactly what they want -- free bread and fantastic miracles, without realizing that God is working among them.  So he castigates the crowds for their misplaced priorities (verse 27),  "Do not work for the food that perishes, but for the food that endures to eternal life, which the Son of Man will give to you."  The statement convicts those masses, the disciples, and all would be followers of Jesus, including me.  Am I a Christian because this is the best path I can see to comfort, wealth, power, good health, good friends, or whatever selfish concern of my own I can imagine?  Or am I a Christian giving thanks that God has chosen me "to be his own and live under him in his kingdom in everlasting righteousness, innocence, and blessedness," as Luther so rightly puts it in his explanation to the Second Article of the Apostles Creed?   What motivates me?

This tendency to view life in material terms is a powerful temptation,  so powerful that Satan attempted to use it on Jesus.  The first temptation that Satan spoke to Jesus was that he could turn stones to bread to satisfy his hunger;  the second temptation was that Jesus could gather a big crowd by doing something sensational like jumping off the Temple.  Bread and circuses writ large.   Jesus successfully fought off those temptations, as well as a third about the gaining of power.

A cynic like me can look through history and find repeated examples of powerful figures making promises of material prosperity, or staying in the public mind by making newsworthy statements, or taking newsworthy actions simply for the sake of their own personal power and aggrandizement.  Beware, the allure.  Jesus is clear, "seek first the kingdom of God ... and all these things will be added to you." But seek first the kingdom.

And who is this kingdom?  Jesus, of course.

We have Jesus.  We have the kingdom.  He has chosen.  He has claimed us.  Bread and circuses do not satisfy;  Jesus is the food that endures to eternal life.


Always remember Whose you are --