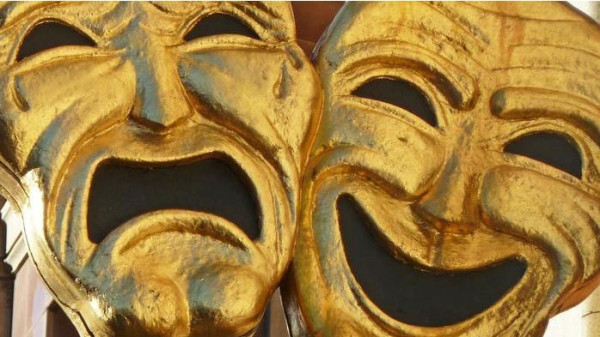 you will weep and lament, but the world will rejoice.

You will be sorrowful, but your sorrow will turn into joy."

Once again Jesus makes a promise during the last few hours he is with his disciples.  He knows his destiny.  His disciples remain flummoxed but attentive.  Jesus is speaking of things and concepts that they are having difficulty grasping.  He says he is going away -- for a time.  But it is for their good, because he is sending an advocate -- the promised Holy Spirit.  But what exactly -- or who exactly -- is that?  He is talking about the judgment of the world, but what will that look like?  He is talking about being "glorified," but he is also talking about being abused and killed.  How does that work?  How do "glory" and abuse and death go together?  So many questions, so many loose ends, so much that is not yet clear -- and won't be clear for a while yet.

Immediately prior to this promise of weeping and lament while everyone else is rejoicing, Jesus says "a little while you will not see me," and "again a little while you will see me."  What can these statements mean?  We who know the answers, "the rest of the story," as Paul Harvey used to say, may have a hard time placing ourselves into the disciples' shoes, but just imagine what it must have been like on that night.

The disciples will see Jesus arrested and carried away by what was considered "authorities," both priestly and governmentally.  They will see and hear the crowds go ballistic demanding the crucifixion of their Lord.  They will witness this and live in lament, mourning, and fear at what became of their beloved Rabbi.  The madness of the world will indeed rejoice at the death of one who claimed to be the Son of God.  Satan will believe he has won.  Sinful mankind will always be tickled pink at the idea that the accusation that 'we are sinners in need of a Redeemer' is now silenced in any way we think we can silence it, even if it means the cruel death of an itinerant rabbi.  Such is the sinful old world, trying to free itself from its bondage.  "Don't tell me I need help."  So we rejoice in the silencing of the one true helper.

But then the turn occurs.  That damned Jew -- damned to die on a cross for daring to challenge the ways of the world -- rises from the dead.  A whole new world suddenly appears.  Satan cannot win!  Death has been defeated!  Sins are forgiven!  The way to eternal life is opened for all mankind!  Now this is something to rejoice about.

And so it is.  Disciples who ran away and hid for fear of the Jews become the fearless proclaimers of a risen Lord and a new existence.  The promise that people will be raised from the dead to a sinless eternal future is for you, too, because Jesus has promised it and he is risen.

Now that is joy.  It's yours, because Jesus went out and did it, for you.