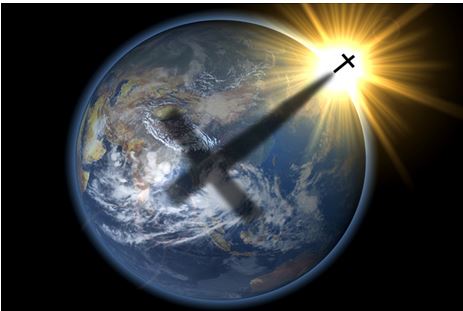 Truly, I say to you, there are some standing here who will not taste death
until they see the Son of Man coming in his kingdom.

There is an old one-liner joke that comes to mind when I read a promise like this from Jesus.  The joke begins with a question, "Did you hear the one about the man who had one aim in life?" The teller then pauses while the listeners wait for the punch line --  "... and missed!"

How often were the disciples like the person in that joke?  They had their own ideas about what Jesus was up to and what he was going to do, and often times missed what was really happening.

We hear this promise from Jesus and wonder, this can't be true because all the original disciples died, and Jesus has not returned in power with his kingdom yet.  In Acts chapter 1 verse 6, the disciples, who have just experienced the greatest feat of power in the universe, Jesus' resurrection, ask Jesus if he will now restore the kingdom to Israel.   Talk about missing the point!

People expect the kingdom of God to arrive in power, might, and judgment, hurling evil and evil doers into the abyss and making all things new.  The sooner the better.  But God, through Jesus, has other plans.

Jesus did return -- in the power of the resurrection.  He ascended into heaven and sent his Spirit to work faith in literally millions of people down through the ages, including you and me.  This is the coming of God's kingdom.  It appears weak and positively trivial, but it is the power of salvation and eternal life, for those disciples who were witnesses of those events and believed, and for you and for me who have heard and believe the mighty acts of God.

Kingdoms, political agendas, family goals, power plays, manipulations, great men and women, aristocrats and slaves come and go.  The archives of history are the dustbins of human dreams, goals, and aims.  Reigning over all is the Lord Jesus, sitting in the right hand of the Father, choosing and claiming those in the world who will spend eternity with him.  The kingdom has come, and the King is at work.  He has taken aim and will not miss.  You are in his sights.  Such is the kingdom of God and its power, that He can save sinners from death and hell in the here and now.