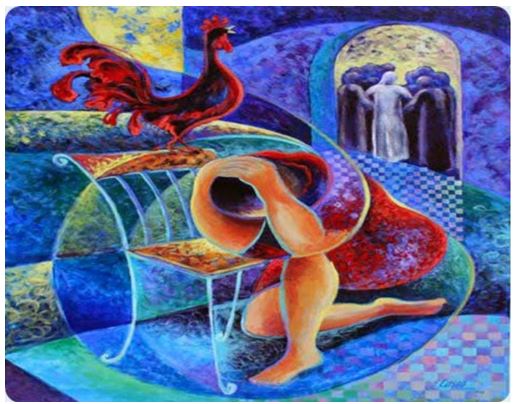 Truly, I tell you, this very night,
before the rooster crows, you will deny me three times.

We are fast approaching Jesus' arrest in the Garden of Gethsemane. Jesus has organized the last Passover meal with his disciples in the upper room. He predicted one of the disciples would betray him. He has instituted holy communion at the close of the Passover meal. The disciples join him in singing a hymn and walking across the valley to the Mount of Olives and the Garden of Gethsemane. Judas has slipped away.

Jesus predicts they will all fall away this very night.  But Peter insists that he will never fall away.  He will follow no matter what ...   And then Jesus says, "Truly I tell you [singular, said only to Peter] this very night, before the rooster crows, you will deny me three times." Peter argues the point, "Even if I must die with you, I will not deny you." Our text goes on to say "all the disciples said the same."
But as Paul Harvey liked to say, "now we know the rest of the story."  What are we to make of this?  Some will condemn Peter for making rash statements about his own capabilities and failing to keep his promises.  Is that really right?  Who else would even dare to try to follow Jesus as Peter did on that night?  Who else had the courage to try?  None of the other disciples did.  No, the reality is that Peter attempted to be more faithful than anyone else on that night.  Because of his failed attempt, we have an eyewitness account of what happened to Jesus after his arrest.  Peter is to be admired for  his attempt, in his over-confident and ambitious way, to do what is humanly impossible -- to follow Jesus perfectly.  We are to recognize that if Peter could not follow the Lord in his own strength and ability that we, too, must rely solely on Jesus and not ourselves.

In his commentary, William Barclay makes some really good observations about this passage:

1)  Jesus was realistic.  He knew what was coming but did it all anyway.  All the suffering, betrayal, and abandonment was clearly known to him.

2)  Jesus was confident.  He said, "After I have been raised, I will go before you to Galilee."  He was sure of the suffering but even more sure of the coming glory.

3)  Jesus was sympathetic.  He did not condemn the disciples for their weakness.  He did not wag his finger at them, reproach them, call them unworthy or any such thing.  He knows they [and we] are creatures who need him to do the task appointed (the Lamb of God who takes away the sin of the world).  He knows all men [and women] at their worst and still loves us all the way through the cross.[1]

The story of Peter's overconfidence in his own abilities and failure that results are  good reminders to remember Luther's explanation to the Third Article of the Creed:

"I believe I cannot, by my own reason or strength, believe in my Lord Jesus Christ or come to him ..."  Peter tried, in his own reason and strength, and failed.  Thank God Jesus sent the Holy Spirit:  "But the Holy Spirit has called me by the Gospel, enlightened me with his gifts, sanctified and kept me in the true faith."  Jesus will restore Peter, and has claimed you through the power of the Holy Spirit.